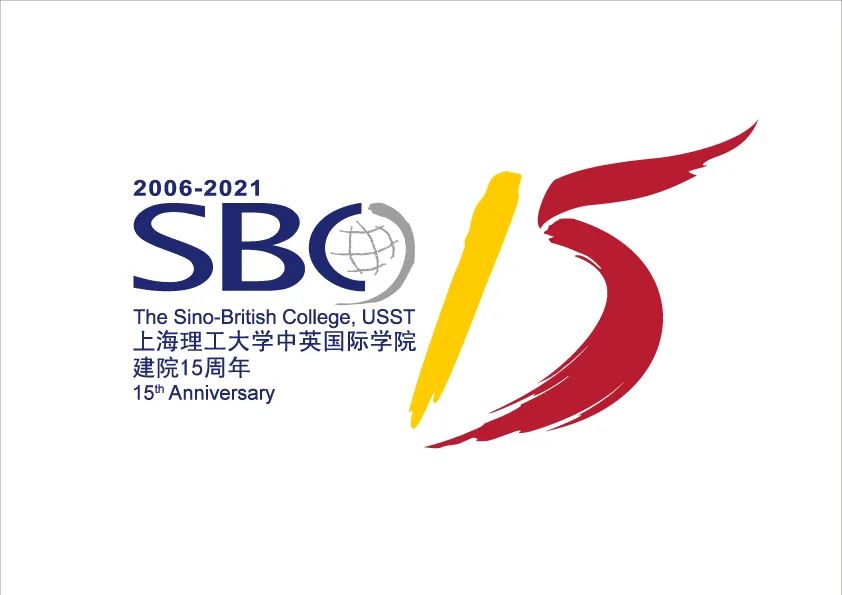 Since its launch in April 2021, our Logo Competition has drawn extensive attention and active participation from both professional and amateur designers. We received more than 30 submissions from teachers, students at home and abroad, and people from all walks of life. We are delighted by the support from all entrants.

After evaluation by the expert panel, the winner of the competition for the 15th Anniversary of SBC logo has been decided and announced for official use.

The main body of the new logo is based on our current SBC logo, in recognition of the past 15 years, which have witnessed the college’s taking root in Shanghai, delivering the best of British education, and modelling international cooperation in trans-national education. The calligraphic elements of the anniversary logo show the number "15" representing the theme of "The 15th Anniversary of the Founding of the Sino-British College of USST". The brushstrokes in the red and yellow colours of USST are balanced with the lines of the school badge to deliver a lively and joyful atmosphere for the 15th anniversary.

Preparations are currently underway for the 15th anniversary of the founding of the college. This autumn will witness the 15th anniversary celebration, including many interesting activities, to be announced through the college platforms such as its official website and social media channels. This year is also The 115th Anniversary of USST, and at this special time, we would like to express our heartfelt thanks and great respect to our leaders at all levels, alumni and students at home and abroad, and to people from all walks of life for their concern and support for the construction and development of our college. We welcome your presence at the 15th anniversary ceremony to enjoy the occasion and discuss the history and the bright future of the Sino-British College.